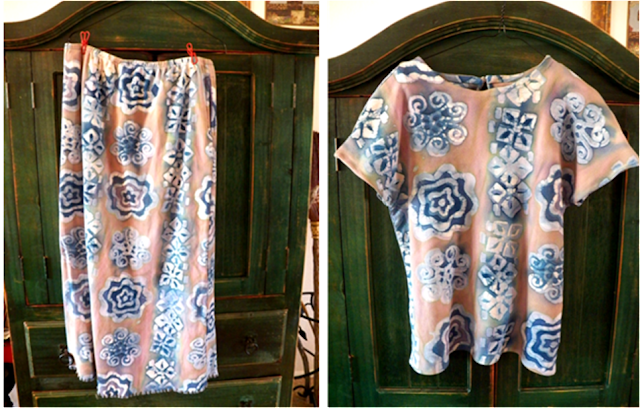 I seem to have built up a backlog of thrift store finds that I bought intending to repurpose!  This week I decided to get going on the pile and have finished one so far. 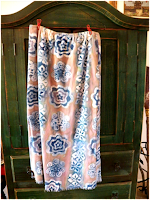 I found this skirt for $1 at Goodwill and instantly fell in love with the fabric!  It's a heavier knit than jersey, but not as heavy as a double knit, and is actually dyed, not printed.  Since it was a 2X, I was pretty sure I'd have enough to make a shirt and I did!  It's really simple, but I'll tell you a few things that will help if you decide to turn a skirt into a shirt also. 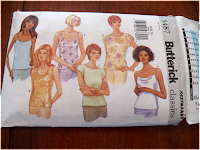 Look for a large sized skirt to give you the most fabric possible, especially if you're not making a tank top.  Shirts are more comfortable for me if they're a little longer (I don't keep tugging them down), so I also look for long skirts.  Unless you find a skirt in an extremely large size, you'll probably need to make a shirt that doesn't have set in sleeves.  I used Butterick 5487 (it's out of print, the Butterick website still sells them here), but any simple shirt pattern will do.  You can even trace around a shirt you have and make a newspaper pattern - just remember to add seam allowances and extra for the sleeve and bottom hems.  A simple neck line facing can be made with a 2 inch wide piece of fabric that's the length of your neckline plus 1/2 inch on each end.  Sew one long edge onto the neckline, turn the 1/2 inch ends in, fold under 1/4 inch on the remaining long edge, fold in half and pin over the seam, and hand sew into place.  It's best if you cut the neck line facing on the bias (gives you more stretch), but I've cut it not on the bias when I've had small amounts of fabric and it works.

I cut the front and back seams of the skirt open and cut off the elastic waist band, giving me two long pieces of fabric.  From there, I just pinned the pattern on and sewed it up as if I would have with any fabric - except that I didn't have enough width on the pieces to place the neck facing strip on the bias, so I got it as close as I could.  This pattern has a back placket and button with a loop closing.  I went ahead and sewed it that way (I think it just gives knits a classier look), but the knit was stretchy enough I could've skipped putting it in and would still have been able to get it on and off over my head. 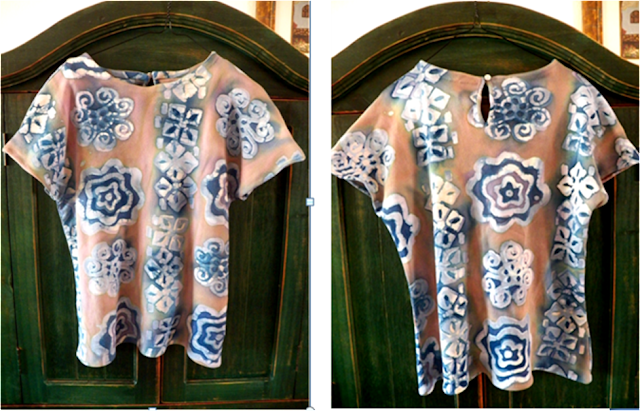 Back to work on the repurposing pile!  I'll have more to show you later.