Every summer I have grand plans to do all my Christmas sewing and crafting by Thanksgiving so that I'm not frantically trying to finish the most important pieces and putting off for "next year" (never comes!) the rest.  I'm a true optimist, so I'm giving it another go!  I have plans for using patterns/instructions I've already developed or that someone else has, but I like to come up with new ideas, so I've been looking around for inspiration.  Who knows what I'll end up doing with this inspiration, but maybe it'll inspire you to come up with something too! 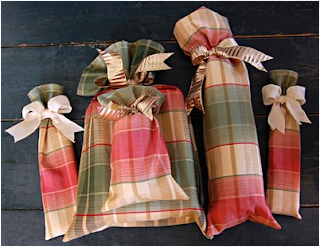 I've been mulling over using some type of fabric gift wrap this year and like the idea of the Korean bojagi I wrote about last Friday.  That sounds like a more complicated way to go, though, than these simple, but gorgeous fabric bags from Rosemary Beck's blog here.  I really like the way they look with a Christmas palette plaid. 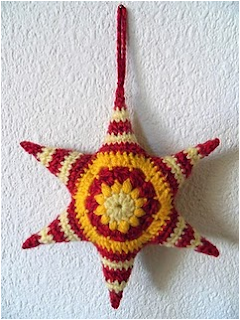 I love the crocheted hexagon stars Daniela Herbertz came up with!  I envision many of them in a rainbow of colors on our tree this year.  Daniella has free instructions on Ravelry with several different variations. 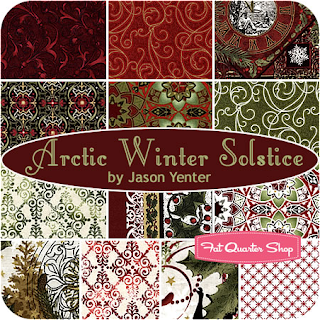 I'm ordering the fat quarter bundle of Jason Yenter's Artic Winter Solstice fabric even though I have no idea what I'll do with it yet.  I try not to do this - my fabric storage/guest room is really quite full!  I just have to make an exception for this, though - it's so beautiful.  Since I'll have lots of fat quarters, it'll probably be something quilted.

I've always enjoyed the collages Henri Matisse created in his later years.  He was unable to paint any longer due to several health problems, but still had a driving desire to create.  So he painted sheets of paper, cut out shapes, and glued them to white paper, forming compositions of color, light, and different symmetries.  He completed Christmas Eve (Nuit de Noel) in 1952 as a model for a stained glass window that was never made.  I'm partial to stars anyways, but I love how these stars seem to rise up and explode.  They definitely seem to expand out of the piece.  I have a couple ideas of where this inspiration is going ..... probably something Christmasy and sewn, maybe including dye.  Stay tuned this fall!  And you can see more of the Matisse collages here.