I'm always interested in and usually fascinated by where artists find the inspiration for their work.  Often, the more unusual the source of inspiration, the more interesting the art work is!  Anyone who quilts knows that a lot of math is involved - figuring out proportions, resizing a block, the geometry of the shapes used.  As soon as I began quilting I began really appreciating much of the math I've learned.  I recently discovered the work of a quilter who is inspired by the types of math usually only inspiring to engineers and mathematicians - not just the math and the visual forms that represent it, but also the stories behind the people who spent their lives working it out. 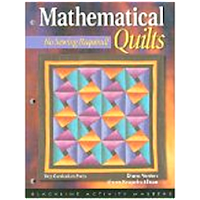 Elaine Ellison is a retired high school math teacher with an obvious true love for her field.  Just looking at and reading about her quilts is an education in itself, but she also developed lessons for using quilting in math classes.  She and Diana Venters wrote two books explaining how to do this if any of you out there are also teachers who are looking for a new way to help math be more concrete for your students.  It looks like they're currently not in print, but I did see several used book sellers offering them on Amazon.

But .... as cool as that is, it's her quilts that really inspire me!  In fact, I spent a whole afternoon looking over them and reading the stories of the math behind them.

Elaine's inspiration on this quilt was the work of Thomas Banchoff, Beyond the Third Dimension.  He found that projecting a sphere into the fourth dimension resulted in a torus.  I love how she also used a color wheel theme in her design - it lets the piece be truly endless.

Koch Curve was inspired by the fractal work of Helge von Koch in 1904.  She shows how the fractal in this piece starts with an equilateral triangle.  Each side is then divided into thirds, the middle third is removed and two more sides facing outward are inserted.  This piece does a great job of illustrating the progression of this!


Bucky Balls and Bubbles is a tribute to Richard Smalley, who discovered the existence of the Buckeyball, adding to our knowledge that there is a third form of pure carbon besides diamonds and graphite and opening up whole new fields.  Buckyballs are soccer shaped molecules resembling geodesic domes - and named after the geodesic dome creator, Buckminster Fuller.  I'm curious how she got the nice sheen on the bubbles that really gives then a 3D look.

Be sure to look at the many, many other quilts on Elaine's website - you'll learn a lot of very interesting things about math and will hopefully be as inspired as I am!