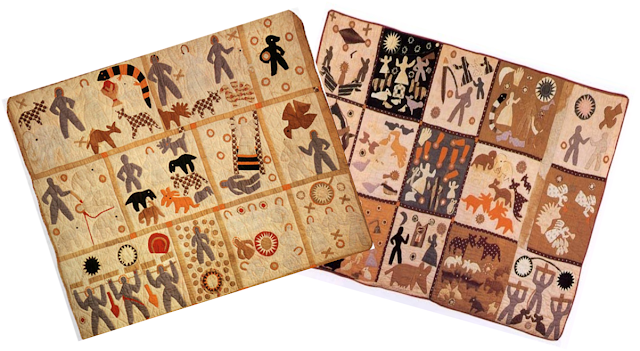 With several spots picking up posts from this blog lately, we seem to be growing!  Welcome to everyone!

One of the busiest posts in the last week has been Blanket Stitch Appliques.  Using appliques is one of my favorite ways of embellishing fabric, so you'll see a lot of projects here using that technique.  In a class I'm currently taking, I came across the fascinating work of a 19th century woman I think you may be interested in. 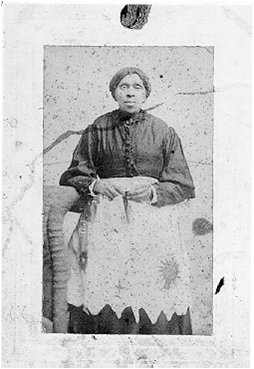 Harriet Powers was born a slave in 1837.  After emancipation, she and her husband owned a small farm in Georgia, where they raised nine children.  Harriet most likely learned to sew as a young child and continued to use this skill her whole life.  She made story quilts using brightly colored appliques (they've faded with time) - these are quilts that tell stories.  Harriet made panels showing stories from the Bible and local events, joining them together.  Looking at her photo, I also noticed she appliqued stars and other symbols onto her apron, so I'm wondering if quilts weren't her only canvases.

Harriet's two quilts that survive today are some of the earliest examples of American story quilts and of African-American quilters' work.  We know she made more - she wrote in letters of exhibiting other quilts in fairs, but so far none have been found. 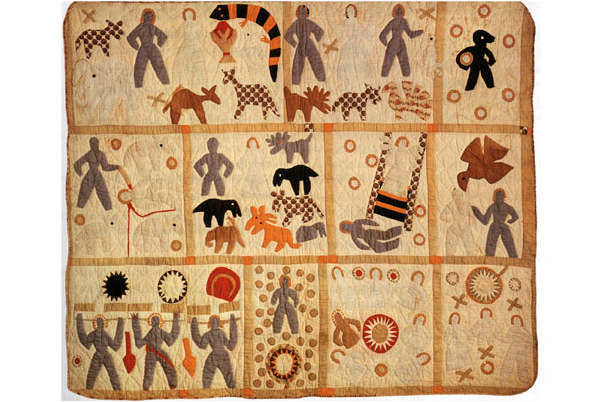 This quilt of Harriet's is known as The Bible Quilt and illustrates 11 stories she studied in the Bible.  When she sold this quilt to a college art teacher, she gave her an explanation of each panel.  Beginning in the top left, Adam and Eve are in the Garden of Eden naming the animals, Eve is in Paradise with one of her sons, Satan is shown amidst the seven stars, Cain kills his brother Abel, Cain travels to the land of Nod to find a wife, the next illustrates Jacob's dream, we see Jesus being baptized, the crucifixion, Judas and the thirty pieces of silver, the Last Supper, and the Holy Family.  This quilt is in the National Museum of American History at the Smithsonian and a more detailed explanation of each panel can be found here. 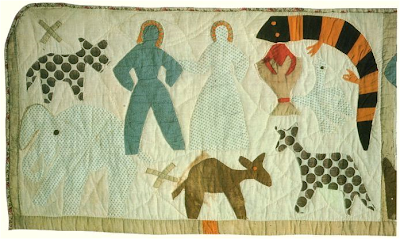 The enlargement of Adam and Eve naming the animals shows how she used different fabrics.  I like the simple shapes and symbols used in telling the story.  I also noticed she doesn't put facial features on her people, which gives them an "any man" feeling.  Without a facial expression to read, we're free to put in our own interpretation. 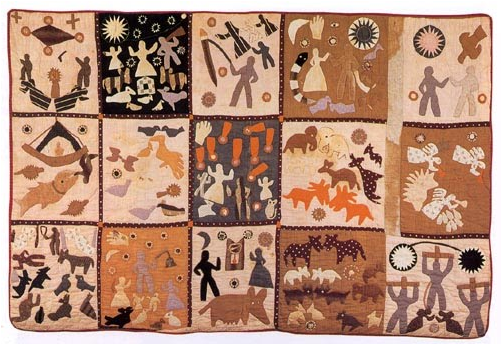 Harriet's second surviving quilt is known as The Pictoral Quilt and is at the Museum of Fine Arts Boston (it's currently not on display).  This quilt is a mix of bible stories and stories from local lore.  The center panel showing stars falling from the sky is thought to depict the 1833 Leonid meteor show, an event that happened before she was born but that was talked about for years after.  Another panel showing meteors tells of  a meteor shower that happened when she was nine.

In modern times, people have noticed the similarity between Harriet's applique style and the appliqued story textiles from Benin in west Africa.  This is an art form that has been practiced there for hundreds of years, since Benin was the Kingdom of Dahomey.  Below is a piece from the University of Virginia Art Museum on the left and one from the Benin Palace Museum on the right.

This seems to say the tradition of appliqued story quilts may have been continued by slaves on plantations in the South, with Harriet seeing them as a child. 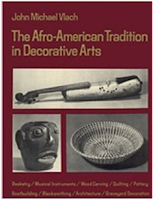 John Vlach's book Afro-American Tradition in Decorative Arts has a good section on the appliqued textiles of Dahomey with several photographs of examples and can be read on-line here.


I am inspired by the idea of a story quilt that records events and have decided to record 2011 on my own appliqued story quilt.  I'll end up with what I hope is a 12 panel piece of very meaningful art.  So .... I'm  hoping that some of you are also inspired by this idea and will join me!  I'll get back to you on that in January. 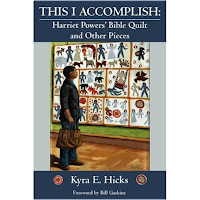 In the meantime, if you'd like to learn more, look up Kyra Hick's book on Harriet, This I Accomplish.
Posted by Deborah Schlegel at 5:30 AM