One of my favorite quilting patterns is the pieced hexagon layout known as Grandmother's Flower Garden.  I remember seeing these quilts while growing up and being fascinated with the way all the little pieces fit together.

Pieced hexagons are one of the earliest quilting patterns we know of.  The little shapes could be cut from small pieces of scrap fabric and pieced together mosaic-like - one of the earliest names for this pattern is Mosaic or Honeycomb Mosaic.  They were definitely being made in the early 18th century and most likely for a long time before that.  During the early part of the 1900's, the pattern was often arranged to make flowers, with a "garden path" meandering around the motifs and became known as Grandmother's Flower Garden.

The earliest quilt I could find that uses this pattern is in the Indiana State Museum collection, sewn in the late 1800's by Mahala Townsend Kelly.  She used silk scraps from her gray wedding dress and from the party dresses of friends.  This was before the flower garden pattern really took hold and does not have the path.


This quilt sewn in the early 1930's by Carrie Stelzer, shows the single colored "path" surrounding each flower block.  It's in the collection of the American Folk Museum in New York City.


One variation on the flower/path design often seen was the addition of stars, as in this quilt from the 1930's and now at the Nebraska Historical Society.  It makes me think of being in a flower garden on a warm, star filled summer night! 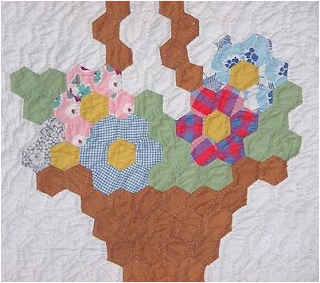 Several years ago, I found this snippet of an old quilt on ebay that shows a variation of the Grandmother's Flower Garden pattern.  A search on Google images turns up several examples of modern quilts being made with this design.  When you think of the hexagonal piece as a mosaic tile, the possibilities are endless!


Modern quilt artists are continuing to evolve the original pattern and are coming up with some very nice designs.  Two of my favorites are Elizabeth Brandkamp's bright garden below on the left and Kingston, Ontario Quilting Guild's diamond shaped pattern on the right. 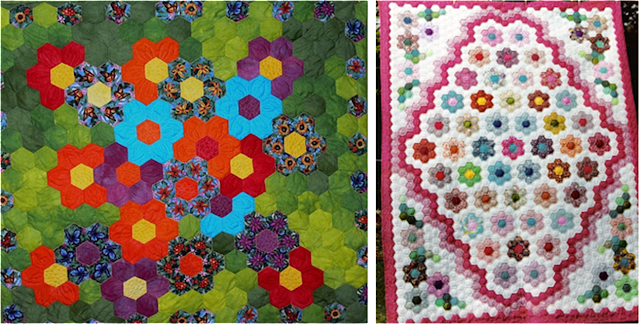 As you can probably tell from the photos, these quilts were made with very tiny hexagons!  Traditionally, these were hand-pieced together using paper patterns - I've never tried this method before, but found what looks like a good photo tutorial at Sunshine Creations here.  I want to make a quilt this way someday - for now, I'm working my way up to it!  Next Wednesday I'll show you what I've been up to and show you how to machine piece a Grandmother's Flower Garden motif using larger hexagons.

Posted by Deborah Schlegel at 10:56 AM