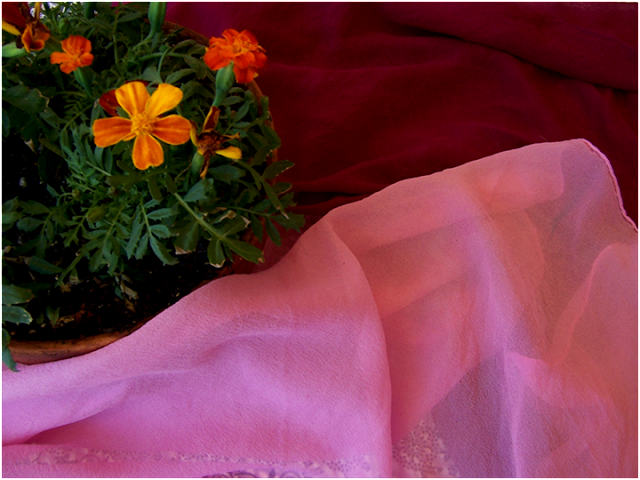 After years of wanting to give this a try, I finally did it!  I ordered the cochineal dyeing kit from Aurora Silk and spent a weekend experimenting!  These pieces of silk and skein of wool are my results ... 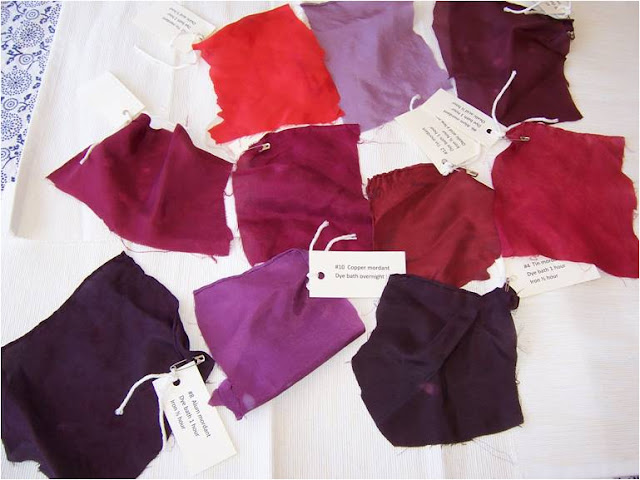 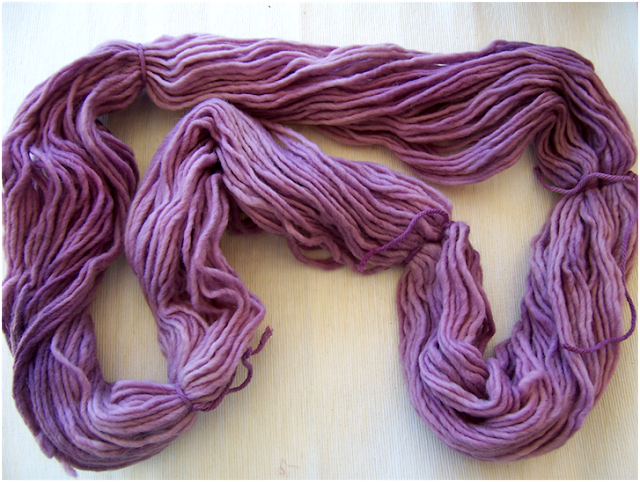 You actually get hemmed silk handkerchiefs in the kit, but I wanted to save most of those so I cut up a silk blank I already had.  It's fascinating to see how different minerals and acidic or alkaline additions change the color!  I can already tell this could become addictive - but be warned, cochineal dye powder is not cheap.  It never was, but heavy rains in Peru damaged the harvests and it recently went up tremendously.

Even though I just began using cochineal, I've always been fascinated with the colors it gives and with its long and amazing history.  The short version is ...

Cochineal comes from female cochineal scale insects that feed on prickly pear (nopal) cactus.  We actually have some on the prickly pear in our front yard.  I had dreams of gathering this someday and making my own, homemade cochineal powder until I found out it takes about 70,000 cultivated insects to make just one pound of dye and I have the much smaller, wild insects on my cactus.  I still might see what I can do with it one of these days. 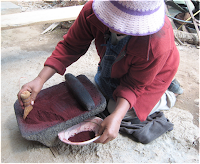 The insects are grown on prickly pear pads, where they spin a web-like waxy substance.  After harvesting, they are dried and ground into a powder.

Most cochineal today comes from Peru, but the European world first discovered it in Mexico with Cortes' arrival.  Red was an extremely important dye (it denoted holiness, power, and royalty) but the dyes then in use (madder, lac, and kermes - another scale insect) were either not very deep or had problems keeping their color after dyeing.  Cortes was amazed to see so much deep, scarlet red being worn by the Aztecs.  We know this from historical writings and have a good indication from the artwork of the time.


While this painting from 1600's Colonial Mexico depicting the meeting of Moctezuma and Cortes was painted 150 years later and is probably not totally accurate, it does show that the large amount of red being worn was still remembered.

Most of the cochineal farms were in southern Mexico (Oaxaca and Chiapas).  The Spanish quickly took them over and used slave labor to keep them going and expand production.  Travel to these regions was strictly regulated and the slaves were not allowed to leave - all to keep a monopoly on cochineal powder.  You probably never learned this in school, but along with silver and gold, cochineal was one of Spain's most prized exports and income producers from the New World.  England's privateers seized it whenever they could and were under orders to immediately return any plant that was also on the ship.  Spain referred to cochineal as a grain and happily added to the wrong ideas of the day that it was totally a plant product.


Finally in 1777, a French botanist, Nicholas-Joseph Thierry de Menonville, succeeded in clandestinely traveling to the Oaxaca region (if he'd been found, he'd have been put to death), gathering samples, and smuggling them out of the country to France's colony of Haiti.  Everyone knew now that the dye came from an insect, but even though several countries were to get hold of samples, cochineal farms didn't take hold anywhere else as well as they had in Mexico.  In fact, the British imported it to Australia where the insects didn't survive, but the prickly pear did and is still a major problem today.

The Spanish were able to maintain their near monopoly on the dye for another hundred years.  When revolution in Mexico became inevitable, they expanded the farms to other regions more safely under their control - like Peru and the Canary Islands.  Then in the mid-1800's, synthetic dyes were developed.  After a stable synthetic scarlet was discovered in 1878, the bottom fell out of the cochineal market.  Within 20 years, Spain's economy crashed.

Today, the widest use for cochineal is as a natural food dye, but it's regaining popularity as a fiber dye with the current move toward using naturally occurring dye stuffs.

If you're like me and fascinated with cochineal's history, the longer version can be found in Amy Butler Greenfield's wonderful book, The Perfect Red. 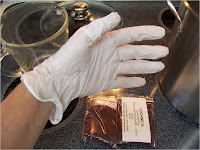 So, enough history - it's time to dye!  When using natural dyes, you need:

*dye stuffs (this is the plant, mineral, or animal matter the dye gets extracted from)
*mordant (a substance that bonds with the dye and binds it to the fabric - these can be toxic or just require careful handling) - I use alum, tin, or copper.  If you use copper, don't pour it outside or down the drain as it is very harmful to wetlands and waterways.  Follow this method from the Aurora Silk website for reusing it.
*distilled water - small amounts of minerals and acidic or alkaline materials will change the color
*assists - these are substances used to get many different colors and shades of colors
*dye dedicated stainless steel or enameled cookware, measuring cups, and measuring spoons - do not use them for cooking!  Natural does not mean you should eat it and at the very least, not many people want to eat magenta spaghetti.
*protective, waterproof gloves

Different sources of cochineal will have different proportions of water and ways they suggest to extract the dye, but basically I simmered 2 ounces of ground cochineal in 2 quarts of distilled water (covered) for 30 minutes and then strained the liquid into an empty gallon water bottle.  I saved the grounds and simmered them again for a weaker dye and even did it a third time and got a pale tint.  This dye concentrate will keep for several weeks in the refrigerator. 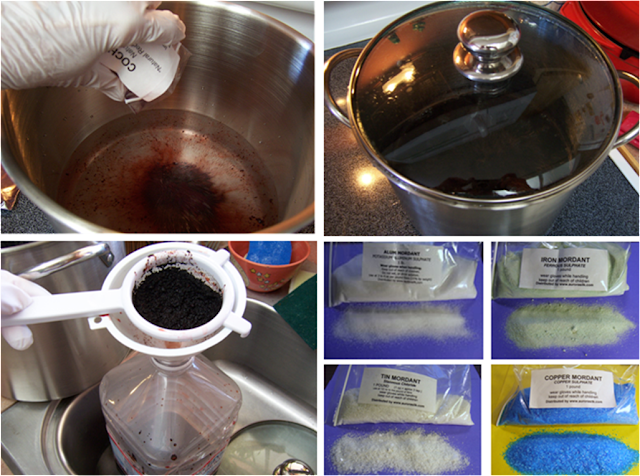 Silk and wool work great with cochineal, but need to be soaked or heated in a mordant first.  I've added a new page that shows examples of the colors I'm getting with different mordants (and different assists) and will add to it as I keep experimenting.  Cotton can also be used.  You need to soak it in tannic acid first - I haven't tried this yet! 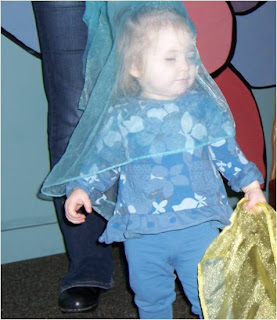 After the mordant step, you heat your fibers in the cochineal dye concentrate for 1 hour.  Let cool.  If you want to change the color, this is where you soak it again in an assist solution (I use water bottles with the top 1/3 cut off) - see the page here for proportions and examples of what I've done so far.  If you like the color as it is, rinse, dry and admire!

For my first real project, I made little c some silk veils.  We went to the Portland Children's Museum (GREAT place!!) when I was last up there and she was mesmerized by the veils.  I got the silk from Dharma Trading Company - the 44 inch square 8mm chiffon.  The photo below shows you how sheer they are. 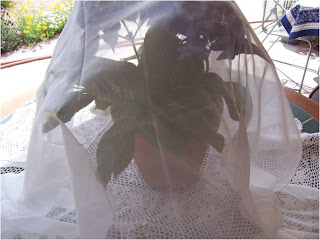 I heated both veils in an alum mordant for a little over one hour.  Then the veil on the left was heated in dye concentrate for 1 hour and rinsed.  The veil on the right was heated in the leftover second extraction concentrate I had from dyeing the wool.  This dye turned a rosy violet when I put the yarn in, so there must have been alkali introduced at some point - not a surprise as our water is very alkaline.  I heated it in the dye concentrate for 1 hour and then let it sit in an oxalic acid solution (1/4 tsp. in 6 cups distilled water) for 30 minutes. 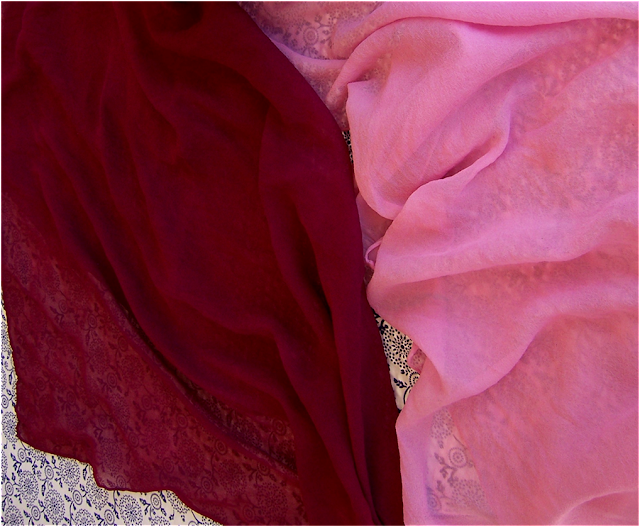 I love how they turned out and am planning what colors I'll do next!  I don't think little c needs a room full of veils, though, so I'll be pouring over Dharma's silk, planning my next project.