I have a collection (only images!) of paintings by past artists that show women engaging in different types of fiber art.  Not that it was called fiber art in the past - more like "womanly past times."  Looking at these works gives me such a feeling of connection to women who lived so long ago and, like me, used fibers to knit, crochet, weave, embroider - to make the clothing and furnishings needed for everyday life.  And to not just make serviceable items, but to embellish them and make them more than just clothing and fabric.  As I'm sitting with my own work, I like to think of these paintings and these women.  Here are some of my favorites:

This piece, showing ancient Greek women weaving, is the oldest image I've found of original artwork.  You can see the types of looms they used, upright and attached to the wall.  The round shapes at the bottom of the warp threads are clay weights that held the threads down.  And to the far left, you can see how the fiber was kept in a bucket and spindle spun.  Weaving was an important tradition for Greek women and there are many stories in Greek mythology and writings that feature weaving - among them, Penelope weaving her father-in-law's shroud and one of my favorites, the weaving competition between Arachne and Athena.

In the Middle Ages, needlework was seen as an appropriate past time for "well-bred" women.  The tapestries that insulated those cold stone walls were all hand woven, fabrics from coarse cloth to fine linens had to be woven, and embroidery was needed on special garments.  This illustration is from Concerning Famous Women, a book by Boccacio written in 1402 and now in the Bibliotheque Nationale in Paris.  Look closely and you can see all stages of weaving going on - carding, spinning, weaving.  And from the clothing the women are wearing, I can see that the queen is working alongside her lady-in-waiting as well as women who are dressed in the manner of servants. 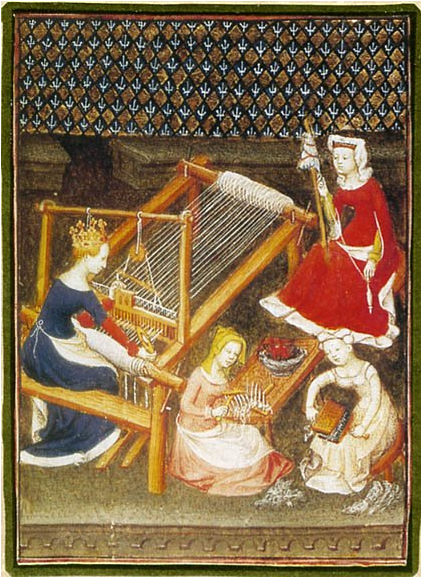 Jan Vermeer is pretty well-known since the movie Girl with a Pearl Earring.  He did like to paint women.  He probably didn't get a chance to do more than that as he, his wife, and their thirteen some children lived in his mother-in-law's house.  And some art historians believe the girl in the painting was his daughter, Maria, not a servant.  See this link for a discussion of the book/movie versus historical record.  Dutch lace in the mid-1600's, when this painting was done, was made by rich and poor women alike - the lace was needed for trimming and could also be relied upon for extra income.  The woman in this painting is making bobbin lace - thread on bobbins is wound around pins that are arranged in patterns on a cushion.  These are all depicted in the painting, as well as the special lace making table that is used.  This site has more information on the process.


I love this oil by Adolphe Bouguereau painted in the late 1800's and showing a young (and very flirty!) girl crocheting.  I can hardly see the thread she's using, but it looks like it is extremely fine.  I believe this is still when crochet was used for making fine lace, so that's most likely what she's doing.

And this oil, also from the late 1800's, painted by Eugene de Blaas is wonderful.  He completely captured the look of heavy concentration on the young child learning to knit and the careful watching, without wanting to look like she's hovering, of the woman teaching her.


While I'm not sure I want to be included in this particular gathering (although if I'd lived then maybe I would have), this Jeanne-Madeleine Lemaire oil painting makes me think of how nice it would be to have an embroidery group.  I can just feel the camaraderie and friendly competition (I love the woman slyly peeking at her neighbor's work) and hear the great gossip!


Diego Rivera painted the ordinary people of Mexico going about their daily business and managed to make much of it look exotic and romantic - I'm not sure this was on purpose, but had more to do with accurately capturing the colors and atmosphere without using photo realism.  This women is weaving with a backstrap loom much like is still used in much of Guatemala and southern Mexico.  I love her yarn holder - I've been toying with buying a swift instead of using the upside down piano bench, but now I'm going to have my husband build me one of these.


I hope these give you inspiration for your own work!