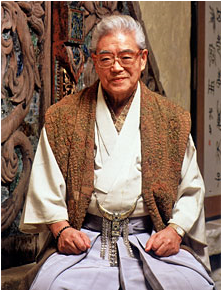 "What I respect, admire, and love the most are the aspects of nature.  The sun, moon, stars, clouds, snow and rain, mountains, rivers, trees and plants, the brilliance of gems -- all natural phenomena provide the source of ideas."  1979, Itchiku Kubota


It's hard to even begin describing the art of Itchiku Kubota.  It feels like there just aren't the right words to use when talking about the masterpieces he created on silk.  He used dye, stitching, embroidery, and inks, bringing life to his visions of color and light in ways that leave one in awe.  To start understanding how he did this, one must look at the journey his life took.  Along the way I've posted a few pictures of his work.  Clicking on them will take you to Gwendolyn Magee's Textile Art Resource Guide's view of the closeup shots, showing the intricate details.  Her site has more of the kimonos, all with closeup links, so be sure to take a look at it.


Kubota was born in Tokyo in 1917.  When he was fourteen, he apprenticed to a kimono artist and began learning the different dying and embellishment techniques used on silk.  At age 20, on a visit to the Tokyo National Museum, he saw a silk remnant dyed with a technique used in the late 15th to early 16th centuries known as tsujigahana.  By the 1900's, this technique was a lost art.  Kubota was so moved by this experience, he vowed to rediscovered its methods.


World War II intervened, however, and Kubota became a prisoner of war in a Siberian camp.  His later work, San - Burning Sun, uses the colors and light he remembers from that camp.  On his release in 1948, he returned to his quest.  After years of work, he came to the conclusion there were too many technical problems involved with recreating tsujigahana as it was originally practiced and developed his own technique using modern silk crepe fabric and synthetic dyes - he named it Itchiku Tsujigahana.  An interesting explanation of the basic steps can be found here.


Kubota's last years centered around creating his Symphony of Light series.  He envisioned it showing a landscape that flowed from piece to piece, beginning with Spring and ending with Winter.  Using eight foot non-functional kimonos, Kubota completed 30 of the envisioned 75 pieces by the time of his death in 2003.  Today, his daughter and son continue his work.

In 2009, a touring exhibit of his completed Autumn and Winter kimonos made stops at the Canton Museum of Art.  A review found here has an example of how three Autumn kimonos are viewed in sequence and a San Diego Union-Tribune article here has more examples of kimonos in the exhibit.  A video promoting the tour can be watched here - it's definitely worth viewing to here Kubota talk of his fateful viewing of the tsujigahana dyed silk remnant and get a few peeks at the exhibit. 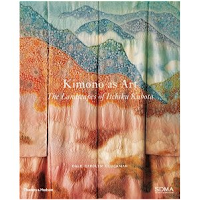 And while it's not the same as being there, the exhibit catalog is still available on Amazon here.

As I contemplate (yes, still!) my next layering technique for the complex cloth I'm working on, I could have no better inspiration than Itchiku Kubota.