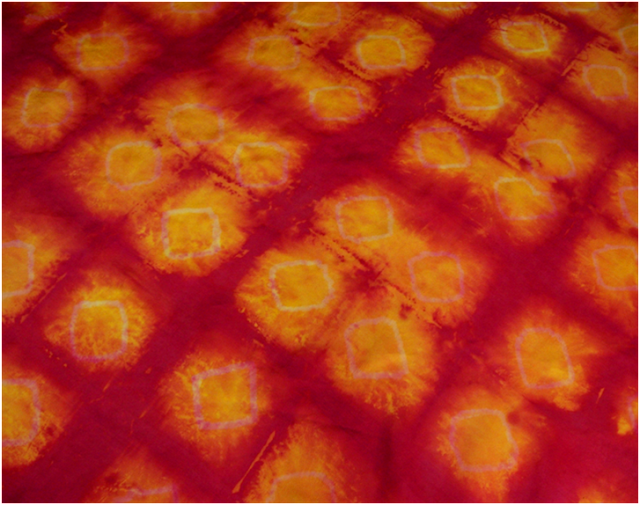 Shibori is a Japanese fabric dying technique where the fabric is shaped in various ways before dying.  The folding, tying, sewing, clamping (there are many other ways) cause some of the fabric to avoid contact with the dye and stay the original fabric color.  Sounds similar to tie dye!  Actually, modern tie dye is a form of resist dying that has its roots in shibori and several other resist techniques that are practiced around the world. 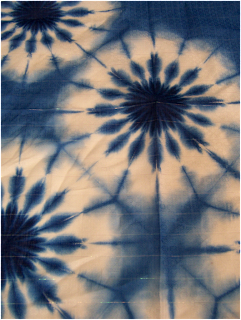 Some of the earliest examples of Japanese shibori date from 756 CE.  These were so finely done, we're pretty safe in saying shibori was being practiced a long time before that.  The traditional dye used was indigo, as in this Japanese shibori dyed handkerchief.


There are many different ways to shape the fabric, each resulting in unique patterns.  Today's opening photo is a silk scarf I first folded and then put between plastic squares that I clamped tightly together.  In the second dying, I used a tightly wound thread resist around marbles in each of the squares resulting from the first dying.

The pillow below is made from cotton that was pleated and then sewn before dying. 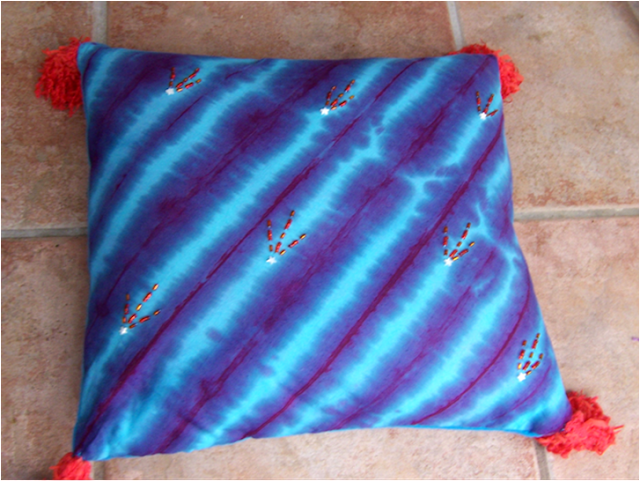 Several years ago, I taught a group of 7th and 8th grade students basic shibori techniques.  We had some spectacular results!  It's a little hard to see, but the pieces on the bottom and top right show how shibori not only results in a pattern but also shapes the fabric, adding to the artistry.

Shibori holds the same fascination for me as does tie dye - you manipulate plain white fabric, apply dyes, and magic happens.  I'm getting the itch to make some shibori scarves!  This is definitely an outside activity, so when the weather here cools down a bit you'll definitely be seeing some shibori Monday Projects.

If you're interested finding out more, I highly recommend Shibori: The Inventive Art of Japanese Shaped Resist Dying by Wada, Rice, and Barton (1999).  There are examples of beautiful shibori work and enough instructions for traditional shapings to keep you busy and perplexed.
Posted by Deborah Schlegel at 5:30 AM