Friday Inspiration - A Space In Between 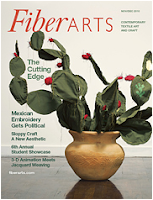 If you're not a subscriber to Fiber Arts Magazine, I highly suggest getting hold of the Nov/Dec issue.  There's inspiration galore and most inspiring to me is the article on Margarita Cabrera's A Space In Between exhibit that was in Houston's Box 13 Gallery earlier this year.


Margarita is most known for her soft sculptures and the way she looks at the political scene of immigration from Mexico into the border states.  In a previous project, she created sculptures of consumer goods made in over the border factories.  She used the actual parts if they were made in this country and replaced the parts made in Mexico with sewn vinyl.  There are several ways one can look at these pieces - they make me think of the people who put these good together for consumers in other countries.  Can they even afford their creations at the wages they're paid? 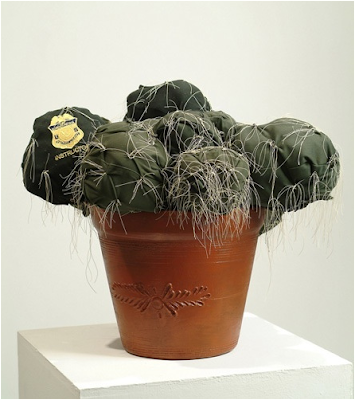 In A Space In Between, Margarita shows us individual stories of nine people who crossed the border from Mexico seeking work in the US.  If you live in the Southwest, every night's news carries stories about the immigration/border situation - but these are pretty much just general stories about "them."  For this exhibit, Margarita hired the nine to assist her in building the sculptural pieces.  She took discarded Border Patrol uniforms, cut into parts for desert plant soft sculptures, and had her assistants embroider scenes from their own border crossings.  It's very moving.  There are images of heat, desert, snakes, helicopters, hiding ...

Be sure to check out Margarita's website for more of her work and Box 13 for a write up of the show.
Posted by Deborah Schlegel at 5:30 AM